On my recent trip to Sri Lanka, I spent one full day in Colombo taking in a few sites and sampling local food. My general rule of thumb is to get out of capital cities as quickly as possible but for some reason I was curious about Colombo. Maybe it was due to all those hours playing Where in the World is Carmen Sandiego

My hostel was 30 minutes by train outside of Colombo in a beach town called Mount Lavinia. I chose the hostel based on its reviews and photos and didn’t realize it was a two hour drive from CMB airport which is really in Negombo and not Colombo proper. Note to self, choose a hostel or hotel in Negombo next time…

Mount Lavinia was okay. After a day of exploring Colombo it was actually nice to relax and take in the sunset along the beach.

Getting to Colombo from Mount Lavinia was very easy though crowded since I went in the morning during rush hour. The cost was 15 LKR which is about $.10 USD. The train was packed and I stood the whole 30 minutes trying to get a glimpse of the beaches we passed by through the open windows and doors.

When I arrived in Colombo there were a lot of people at the train station also getting off at Colombo. It felt electric. I came across a bridge to cross the main road and figured that was a good place to start my adventure.

On the road opposite the train station there are several booths and stalls selling items, food and fresh juice. I passed by a little restaurant with a juice stand and menu for Sri Lankan breakfast and decided to give it a try. I had their egg meal for breakfast which consisted of dal, a hard boiled egg, rice, spicy green beans a potato curry and a spicy shredded coconut. For my first meal in Sri Lanka it was a winner. The staff was also very friendly and recommended some sites to see nearby like the Red Mosque.

After breakfast I took their advice and walked a few blocks to the Red Mosque/Masjid through a market street. The stores and stalls along the market sold mostly electronics, fabric and hardware. It was an interesting mix of goods.

The Red Mosque/Masjid was in the middle of a narrow street and was indeed red as described. The architecture definitely stood out in the neighborhood of local shops and narrow streets. 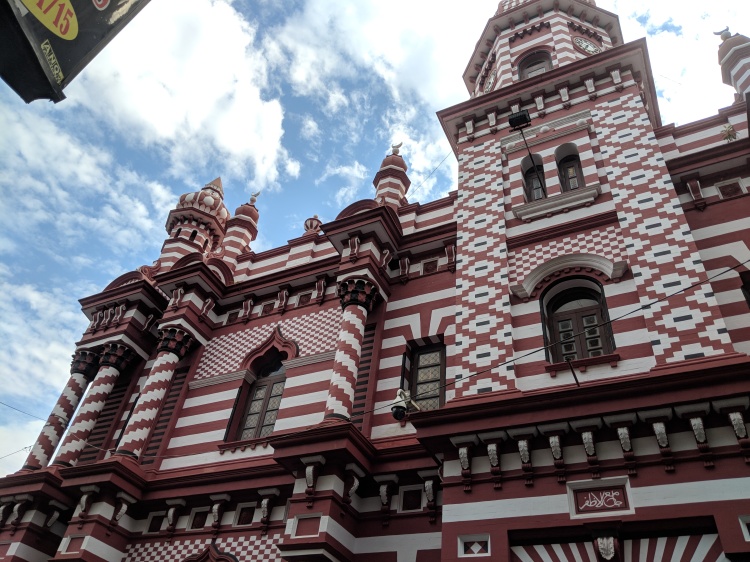 After taking a few photos I hopped in a Tuk Tuk to Gangaramaya Temple. The temple is home to a museum, a replica of Borobudur, a stupa, a Bodhi tree and much much more. Having been to Borobudur I was very impressed with the replica. 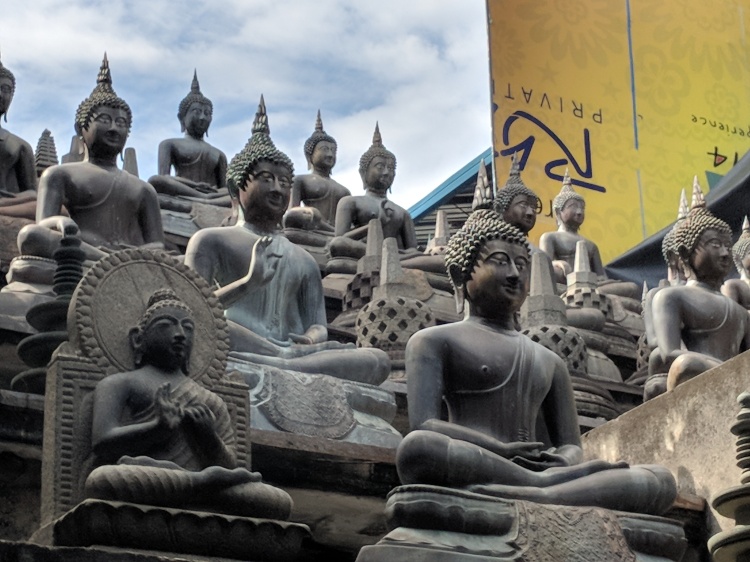 Walking distance from Gangaramaya is Beira Lake and another Buddhist temple called Seema Malaka adorned with gold Buddha statues around the main temple building. It was built in 1979 so it’s a bit more modern than other temples I’ve been too but it’s a nice place to visit on a walk around the lake.

The sun was getting hot so I found another Tuk Tuk to take me to the Dutch Hospital which is actually a shopping area and not a medical building. I cooled off in the shops and cafes then hired a driver to take me to a more temples and some shops. 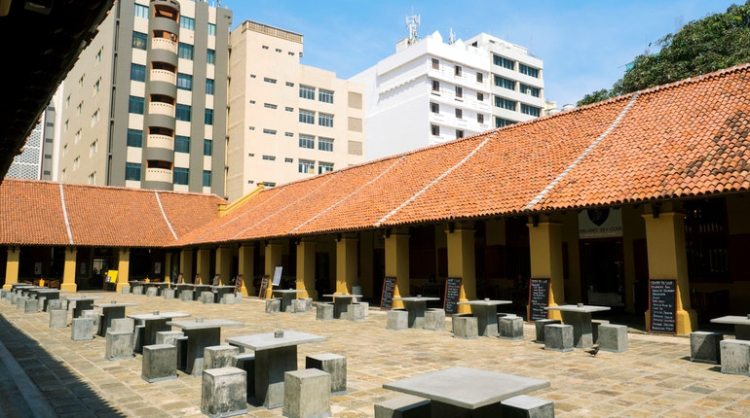 New Kathiresan Kovil Hindu Temple
After my sightseeing I was ready for some more food and opted for afternoon tea at the Kingsbury. It was buffett style and had all the High Tea items one would expect like tea sandwiches, scones and miniature desserts. The salon at the Kingsbury was nice and cool, had a view of the sea and live piano music. Super relaxing after a day of Tuk Tuks and bargaining in markets.

After tea I made my way back to Mount Lavinia in a taxi and enjoyed a walk along the beach and drink during the sunset.

Gangaramaya Temple: The Borobudur replica and stupa are worth the trip.

Sri Murugan Kovil Hindu Temple:one of the most visited by tourists. 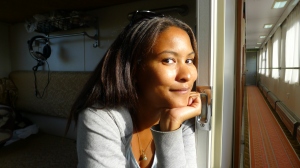 I’ve been to 69 Countries and all 7 continents. I hope my travels inspire you and spark conversation. I’m always happy to share tips and recommendations so feel free to get in touch.